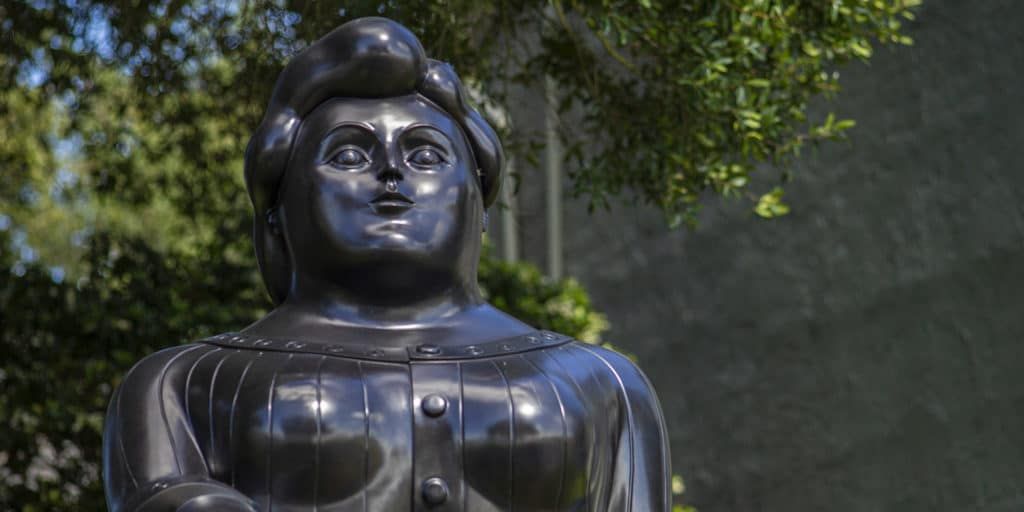 Early this summer, our senior photographer sent me an email with some images attached. “Have you seen this?” he asked. He was referring to Mujer Vestida, the 10 ½-foot bronze sculpture by legendary Colombian artist Fernando Botero that popped up on Bayshore Boulevard seemingly out of nowhere in June.

As it did for many Tampanians, its distinctive look and placement — on what appears to be a random patch of grass near Bay to Bay Boulevard — turned our photographer’s head and caused him to pull over and snap some shots. How did such an iconic piece of art end up on this blank stretch of Bayshore?

It’s part of what will soon be the Ritz-Carlton Residences Tampa, a project by Miami’s Related Group. Set to break ground later this year and open in 2024, the property will feature 89 Ritz-Carlton-branded luxury condominiums along with 12 townhome-style villas and, like every one of Related’s properties, a plethora of unique and specifically curated, museum-level art throughout its public spaces. Hence, the Botero.

Related Group’s passion for art starts at the top. CEO Jorge Perez is one of Florida’s largest private collectors, and Mike Hammon, Related Group’s senior vice president and the project manager of the Ritz-Carlton Tampa, says his passion has trickled down to the rest of the team.

“[Art] has now become, I think, sort of synonymous with Related. Any Related project is going to have art,” Hammon explains. “As much as anything, it’s his passion, and that passion has sort of transferred to all of us, and we get excited about it. It’s fun to work on, and [it adds] a nice touch to the property.”

From the beginning of each Related project, the developer begins working with architects and interior designers (in this case, Arquitectonica and Meyer Davis, respectively) to create an art book and determine what pieces might work best for the project. Related has in-house curators who consider all elements of the project, including the culture and history of the surrounding community, when selecting pieces to fill a new building.

Anelys Alvarez, an assistant curator with Related Group, works with her fellow curators to choose from the more than 2,000 pieces in the corporate collection, Perez’s personal collection (which she also helps manage) and unique pieces with local artists near a particular project.

“We do a lot of commissioned and site-specific opportunities for the projects. It’s as a way to develop and to work with the local art communities,” Alvarez says.

“We try to explore with other institutions in the city and engage them to make them part of the selections that we are making for a specific project,” Alvarez says.

She says Related’s curators also aim for a mix of emerging artists with master artists like Botero, which has helped draw people to the sales gallery at the Bayshore property (though, Alvarez notes, it has yet to be determined if the sculpture will be one of the permanent outdoor pieces on the Ritz-Carlton Tampa property). An early version of Mujer Vestida, or Dressed Woman, is on display in the Plaza Botero in the artist’s hometown of Medellín, Colombia. He is best known for his still-life work, primarily of large figures, sometimes called “Boterismo.”

“We are super proud to have several Botero sculptures in the collection,” she says. “He is one of the most known masters in Latin American art, and that particular piece is a symbol of what the project is going to be.”

That is, luxurious, cutting-edge, awe-inspiring, and perhaps a bit surprising. Because art is so integral to Related’s philosophy, Alvarez says that the company takes an art-first approach to the subject. That is, design around the art, rather than choose the art based around the design.

“It’s kind of a different process from other companies because in our case, it’s not that the art has to complement the design. Mr. Perez, being who he is, he is such a passionate collector, so art is key. Everything revolves around the art that is going into the project, around those pieces that are meant to be a statement in the building.”

One major statement on the property is a piece of Tampa’s history that Related is preserving.

The Ritz-Carlton site is the former home of the Sanatorio del Centro Español de Tampa — the hospital of the Centro Español, a mutual aid society for the city’s Spanish immigrants. The three-story hospital was completed in 1906 on Bayshore Boulevard (between what is now Bay to Bay and El Prado boulevards), and through their club dues, members could have all their medical needs attended to at the facility. Cigar manufacturer Angel L. Cuesta donated the land, where the hospital sat until 1970, when a new facility was constructed in West Tampa.

When the hospital was demolished, all that remained was a fountain that has fallen into disrepair over the decades. As part of the construction process, Related Group is rehabilitating the fountain, making it a centerpiece of the property’s landscape. Before consulting with history experts, Hammon says, the team wasn’t sure what the fixture was when they first discovered it.

“I thought it was a planter because there wasn’t running water, and it was covered in landscaping,” he recalls. “For us, it was very exciting to save something historic. We’ve cleaned up the fountain so we could see it, and now we’re going to move it during construction and then restore it and move it back. We have put it in our permanent site plan, so it has been permanently located. For us, it’s something to do for the community.

“It’s probably a bigger passion of mine than anybody else’s because I like to save historic stuff,” Hammon admits. “In the [end], it will be visible from Bayshore, just as it was back in 1906 when it was built. That’s just something that was important to us.”

Paired with The Residences at The Tampa EDITION scheduled to open in Water Street Tampa at the end of this year, these residences are pulling on the city’s past, bringing in its cultural present and perhaps indicating the future of luxury living in Tampa. “I just think it’s just something that’s been missing,” Hammon says. “I think this is an important step for Tampa as a big emerging city, to have these types of institutions.”