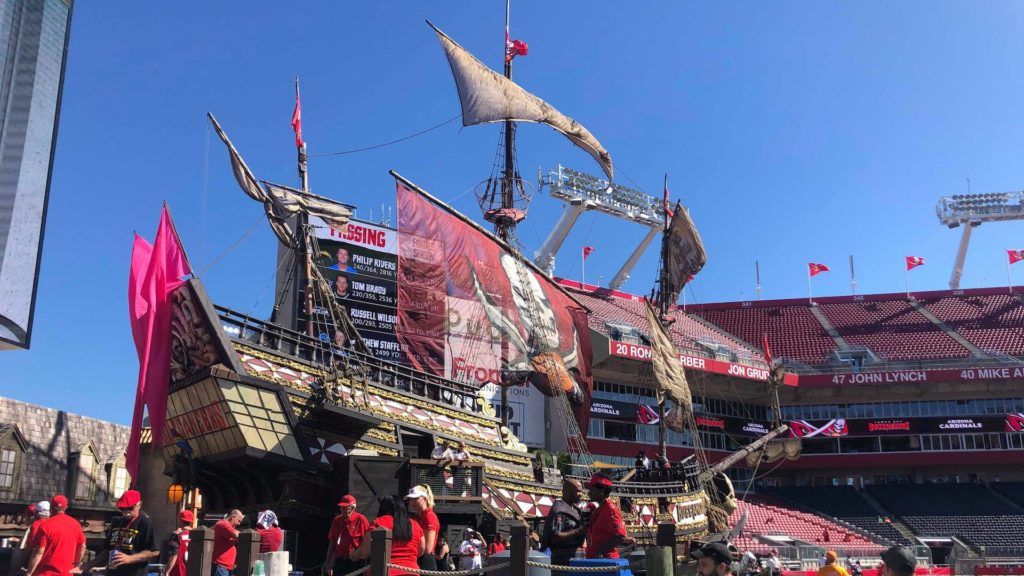 On Thursday night, the Tampa Bay Buccaneers begin their quest to defend the Lombardi Trophy. As the reigning Super Bowl Champs get ready to take the field, we take you through everything you need to know – including how to get to that free Ed Sheeran concert.

Brady and the Bucs are back. After an offseason of Super celebrations (and questionable trophy throwing), the 2020 Super Bowl Champions have returned to defend their title. Looking ahead to Thursday’s season opener and the entire 2021 season, Buccaneers fans have plenty of reasons to be optimistic that year two with Tom Brady can be just as good as the first. And perhaps – knock on wood – this year’s version might be even better.

But let’s hit the pre-game stuff first. Every year, the defending Super Bowl winners get to host the first game of the season, a massive primetime event to officially kick off the new season, complete with all the fanfare and revelry the NFL can muster. Chief among the excitement this time around is the 2021 Kickoff Experience Presented by EA Sports Madden NFL 22. Find a full breakdown here.

Festivities take place at Julian B. Lane Park in Tampa and begin at noon on Thursday. Attendance for all events throughout the day is free, however, it is a requirement that attendees must download the NFL OnePass app to gain admittance, so don’t show up without your phone. Highlights of the Kickoff Experience include appearances by Buccaneers legends and the opportunity to take pictures with the Vince Lombardi Trophy and all 55 Super Bowl rings.

The big draw, of course, is the pregame concert featuring Ed Sheeran, starting at 7 p.m. While attendance is free, access to all areas is first-come, first-served. All events are scheduled to take place rain or shine, and for those who couldn’t score a ticket, the NFL is hosting a watch party during the game in the park, as well.

For those watching from home, the Bucs kickoff at 8:20 p.m. against the Dallas Cowboys on NBC.

Storylines for the season

Could the 2021 Bucs be even better than the 2020 Super Bowl Champion squad?

Sure, Tom Brady is a year older, and he probably can’t play forever, but there’s actually reason to believe his offense could be even than last year’s version. By all accounts, Brady is somehow still in better shape than most healthy 25-year-olds, and the reports from the rest of the squad bring even more reason for optimism.

Star receiver Mike Evans, according to himself and his coaches and teammates, is in the best shape of his career, which is saying something for him. Popular tight end Rob Gronkowski is also reportedly feeling much better compared to this time a year ago when he had abruptly left retirement to join Brady in the Bay. Mega-talented (if not off-field-troubled) receiver Antonio Brown didn’t even join the arsenal of playmakers until the second half of last season, and is significantly more entrenched going into 2021. Not to mention, last year was the first time for this group to be together. Now, they have a year of experience together getting comfortable, developing chemistry, and mastering the system.

And let’s not forget: the Bucs did it the hard way in 2020. Last year’s team may have won the Super Bowl, but in the regular season they didn’t even win the division. The Lombardi is better, but surely Brady wouldn’t mind adding NFC South champs to his list of accomplishments in Tampa. And given what he has to work with this year, he’s likely to get that opportunity.

For all the big names, parades and attention, continuity is the real reason to expect big things.

Much has been made of the fact that the Bucs return all 22 starters from last year’s title team, and it truly is a pretty wild stat. Consider – of the 53 players on the active roster going into Thursday’s opener, 43 of them were on the team last year, too.

However, while returning players is important, the more underrated reason to expect continued success is the return of all of the team’s top leaders off the field. Head coach Bruce Arians, offensive coordinator Byron Leftwich, defensive coordinator Todd Bowles, and mastermind GM Jason Licht are all in their same offices ready to pick up where they left off. The systems are all the same, the relationships are already built, and after a full year-plus of all starters and coaches being together, the most important thing of all has been developed and established: trust.

But what about those few new faces?

While none of the new players seem likely to crack the starting lineup, depth is key to winning titles over a lengthy and sometimes violent season of football. Perhaps the biggest standout in the preseason was veteran newcomer Giovani Bernard, a smart and experienced running back likely to receive a lot of work on third downs thanks to his ability to block and to catch passes out of the backfield.

While Bowles’ defensive unit is strong, it’s also a bit on the elderly side in spots, at least by NFL standards. There ought to be space for more players to rotate in, particularly in the front seven. A pair of rookie linebackers seem primed for opportunity here. Bucs’ first-round pick Joe Tryon-Shoyinka dominated the PAC-12 at Washington, and he is expected to bolster the Buccaneers pass rush from his position on the outside. On the inside, former Auburn standout K.J. Britt, a fifth-round pick this spring, has drawn praise for his performance in camp and will add some depth thanks to his sound tackling and pass coverage ability.

Will there be any rust for the Bucs to knock off?

It’s a time-honored tradition in the NFL that star veterans get a little extra time off in the preseason, but with a starting lineup made up almost exclusively of star veterans, it will be interesting to see if it takes these Buccaneers some time to get into a rhythm. After all, the most the starters played all preseason was a scant three series in the last game against Houston.

Granted, with Brady at the helm and all of the aforementioned experience, they should be fine. But that’s why they don’t play the game on paper.

The Cowboys have questions of their own

While Dallas is a talented team with plenty of its own stars, Mike McCarthy’s team is entering the season with some immediate areas of concern. Primarily, the loss of star offensive lineman Zack Martin due to Covid protocols leaves the Cowboys with a big hole against Ndamakong Suh and the rest of the Bucs’ beastly defensive line. Dallas has the receivers (and the quarterback) to still put up points, but it creates a matchup nightmare for the visiting team.

Then the big question: how will Dak Prescott look? The highest-paid player in the NFL is, by all accounts, recovered and ready to go, making him an immediate threat against any defense. But after an ankle injury ended his year mid-season in 2020, Prescott suffered another setback with an injury to his throwing arm in preseason camp this year. As a result, Prescott didn’t play in a single preseason game, and has only practiced five times since the end of July. He’s an elite quarterback, which Tampa’s defense well knows, but this will also be his first action in nearly one full year.

Fire those cannons – Ray J is back at full capacity for the first time since Brady became captain of the ship, and as anyone who has looked at StubHub knows, this is the hottest ticket in town since, well, the Super Bowl. And speaking of The Big Game… Thursday will be the seventh time Brady has played in this season-opening game as a defending champ, and he has a 5-1 record in his previous six attempts.

As the Bucs begin their quest to defend their title, they can expect to have the most raucous atmosphere Raymond James has seen at least since Jon Gruden roamed the sidelines, if not ever. It will be the first time since 2019 that either team has played in front of a capacity crowd, and the Bucs can happily expect a homefield advantage Thursday.