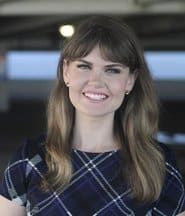 The City of Tampa has selected former reporter, Lauren Rozyla, as the new Media Relations Manager.

Lauren Rozyla is a familiar face in the Tampa Bay community, having worked as a morning show reporter for ABC Action News. She is a self-proclaimed “city government nerd” who spent the past six years covering traffic safety and education topics. Lauren will be joining the City’s Marketing & Communications team, which is tasked with telling the city’s story, sharing key updates on City projects, initiatives, and services, and keeping residents informed with critical information.

Lauren Rozyla is an emmy-award winning journalist with more than ten years of reporting experience across the country. For the past six years, she’s covered traffic safety and education issues as a morning show reporter for WFTS-TV (ABC Action News) in Tampa. As a volunteer, Lauren advocates for causes that boost childhood literacy and provide mothers with resources to support themselves and their children. She lives in Seminole Heights with her husband, two small children, rescue pets and a flock of backyard chickens.

Adam Smith is another familiar name in Tampa Bay journalism.  As political editor for the Tampa Bay Times, he was named one of the best political writers in Florida by the Washington Post, and named one of the nation’s top 10 political reporters by the Columbia Journalism Review. Before his appointment as City of Tampa Communications Director, Adam served as Senior Vice President at Mercury, a high-profile public strategy firm. A New York native turned long-time Tampa Bay resident, Adam is passionate about telling good stories for the City of Tampa.