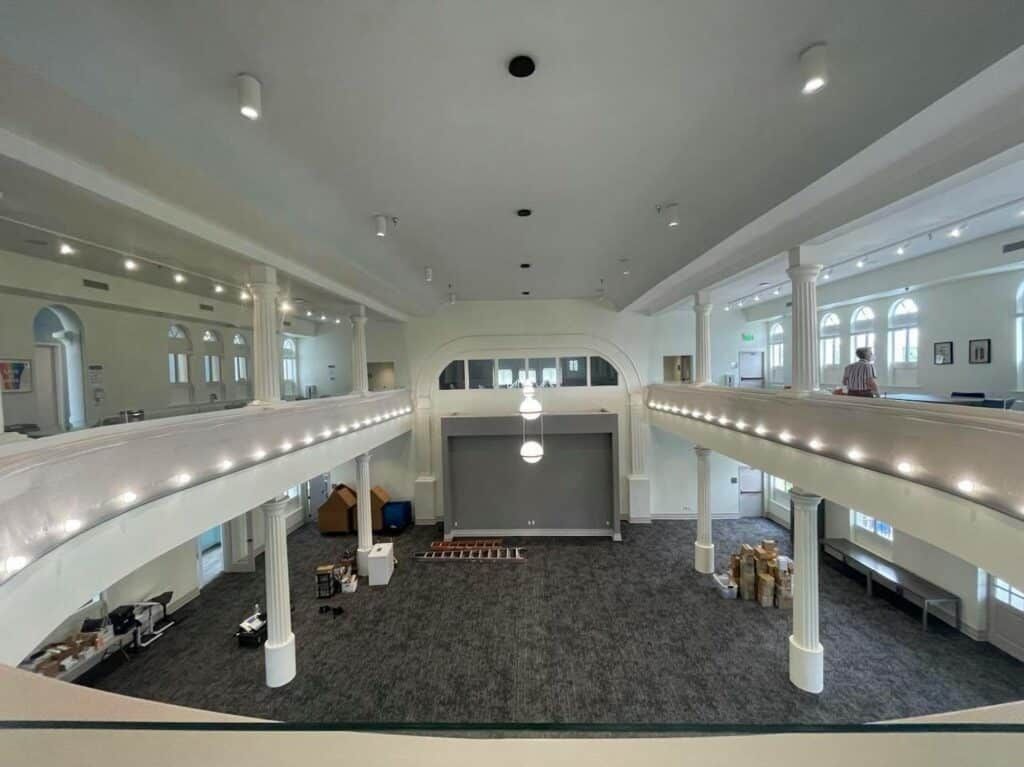 Metro Inclusive Health’s brand new facility inside the historic German American Club in Ybor City is officially open and providing vital care for those in the community. The brand new facility doubles the nonprofit’s impact in the city of Tampa.

The German American Club was built in 1909. METRO worked extensively and exhaustively to restore the building. Original column and brick work can be seen inside the offices and conference rooms inside. An array of local art and photography ornaments the walls as you navigate through the expansive space. Now, fully revitalized, the German American Club building can once again serve as a boisterous community events center.

The light fixtures that illuminate the grand hall were also part of the original structure. A spacious VIP on the second floor room offers a panoramic view of the entire hall. Crews are working swiftly to ready the space for visitors.

Once open, the grand hall will be home to dozens of social programs offered at little to no cost to LGBTQ+ youth, seniors, young adults and the trans community. Furthermore, what is certain to become one of the area’s most sought after event venues, community rentals of the elegantly restored Grand Hall will offset costs while allowing METRO to focus on expanding services.

The prgoress METRO has made on the space can be linked back to a generous gift from the Vinik Family Foundation (VFF).

A substantial gift of $100,000 from the VFF supported the organization’s “Raise the Roof” campaign to fund the development of this new 30,000 square foot facility in Ybor. METRO acquired the building in 2019 through a partnership between METRO, CAN Community Health (METRO’s partner in HIV care) and Alliant Partners.

Following the donation, METRO decided to name the rand Hall Balcony after Jeff and Penny Vinik.

The state-of-the-art Healthcare and Community Center provides over 100 services and programs focused on the health and wellbeing of the diverse Tampa Bay community, including Primary Care, Behavioral Health, Psychiatric Medication Management, HIV Medical Care and Case Management, STI Education and Prevention including Testing, PrEP and nPEP and TeleHealth.  Located in the 33605-zip code with a community makeup of 62% Black/African American and 22% Hispanic, the location will also greatly increase access to care among communities of color.

“Healthy communities make successful communities,” said Jeff Vinik. “With Tampa Bay’s fast growth as a highly desirable place to live, work and play, the health equity services provided by Metro Inclusive Health are paramount to our communities long-term sustainability. We are so thankful for the work they do and are pleased to support their growth and impact on our Tampa Bay region.”

With the opening of this facility, METRO is also expanding its exclusive Copay it Forward program, whereby insured patients become health equity heroes just by using their normal copay for services. In 2020, that impact totaled $485,163 in services to uninsured patients including healthcare, counseling and housing and food security, among others. METRO is also one of the few local providers that combines a TeleHealth and in-person appointments for a consistent patient experience. Through a partnership with CAN, the organizations remain the only local provider of HIV care alongside primary care for a holistic approach for those living with HIV.