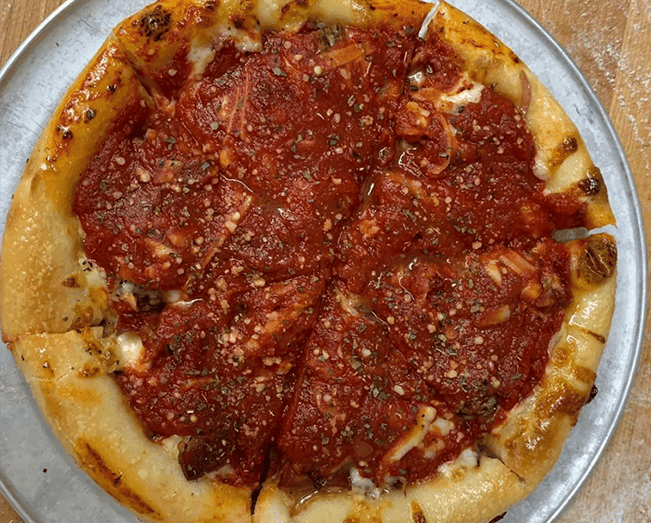 Sally O’Neal’s Pizza Hotline, a family owned and operated business at 1319 South Howard Avenue, has served South Tampa since 1985. We can’t think of a better spot to visit on National Pizza Day in the city of Tampa.

Sally O’Neal’s prides itself on its product, from the locally sourced vegetables and the fresh baker’s yeast, to the homemade sauces, marinades, and dressings to the best quality meats, they’re all about serving the best pie possible.

In year’s past, Sally O’Neal’s has been recognized as the best independent pizza place in the entire Tampa Bay region. Sally O’Neal’s Pizza Hotline owners, Pat and Judith O’Neal, have always felt they were feeding their friends, at their house with homemade food.

With the best ingredients and a passion for quality they have made Sally O’Neal’s a South Tampa landmark.

While Sally O’Neal’s may be a tradition in the city of Tampa, that doesn’t mean the owners aren’t willing to experiment. This much is evident with their monthly pizza specials. For February, the restaurant has created a special Cuban Pizza.

The pie, only available through February 2021, features a mustard and mayo base with shredded Swiss cheese. The chef then tops it with sliced ham, salami, and then slow-cooked Mojo marinated shredded pork. Lastly they toss on some pickles to complete the transformation. It’s the most Tampa slice you’re bound to ever try.

Sally’s is famed for its sweet Chicago pie. First they butter a deep dish pan and season it with Italian herbs. Then the restaurant layers the dough with their three cheese blend, caramelized red onions, meatballs, and candied bacon. Last they top it with their pizza sauce and some pecorino and parmesan cheese. Get a knife and a fork, and treat yourself, Tampa.

Other specialties include chicken asiago, a sauceless pie, a taco pizza topped with avocado, portobello goat cheese, and chicken pesto.

Hidden Gems: Scachatta is the Sicilian-Cuban pizza you will only find in Tampa