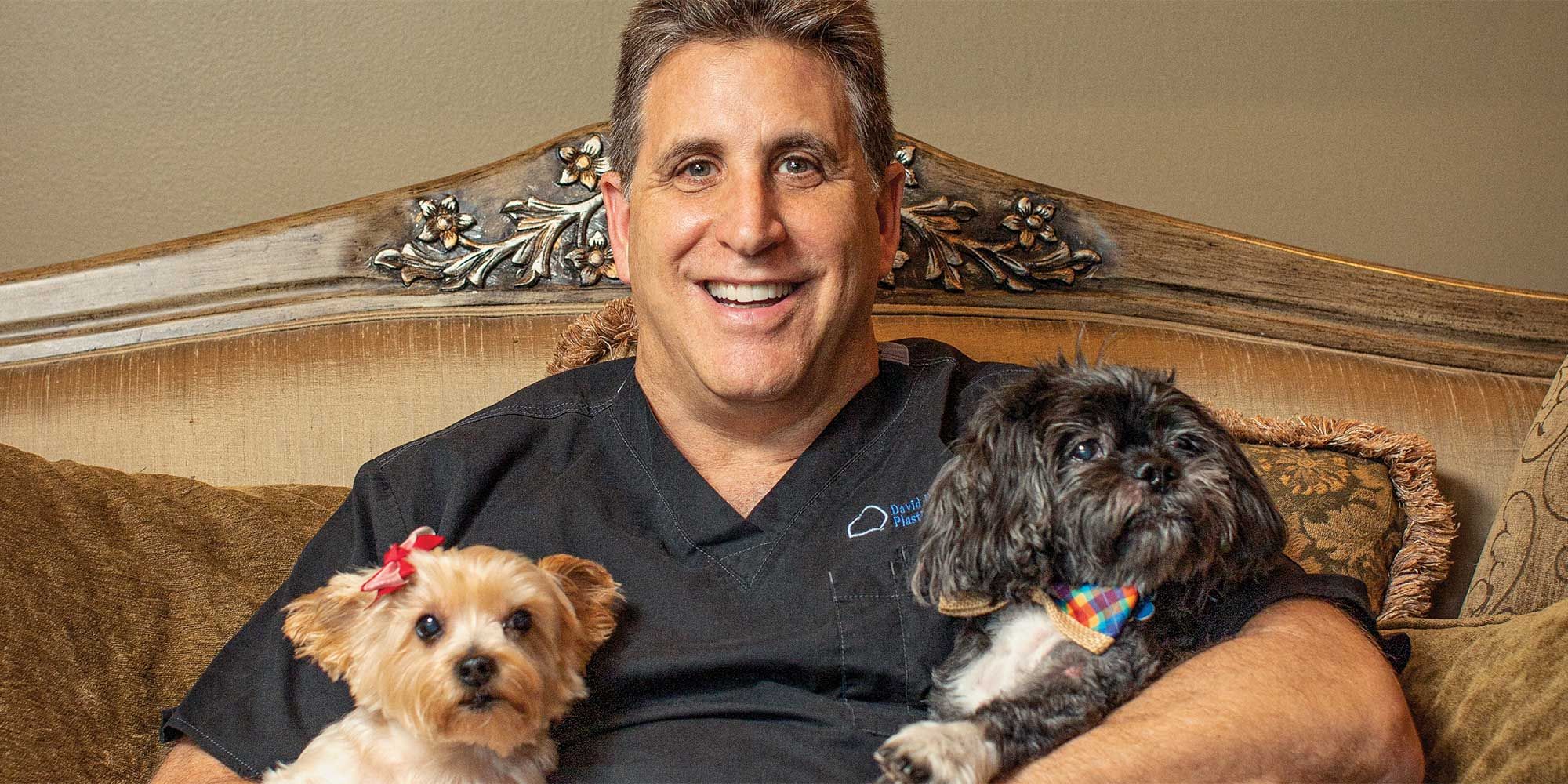 The original oath upon which modern medical codes of ethics are based include a vow to “help the sick.” While Hippocrates was likely referring to humans with his words, physicians generally have an innate care for all living creatures and a passion for lending a helping hand.

That dedication to healing is what led Geoffrey Kwitko, M.D., and David Halpern, M.D., to partner with veterinarian Marlene Siegel, D.V.M., and take on a slightly new kind of patient earlier this year —?a puppy named Athena.

“Dogs are like little angels on earth,” says Kwitko, an oculoplastic surgeon. He is well known among his patients for being a dog lover (that’s his golden retriever, Pippa, on the previous spread), and all it took was one phone call for him to jump into action. “There was no way I was going to let this dog suffer. Once I found out no one else was willing to help this dog, I was more than happy to do it.”

Siegel, the owner of Pasco Veterinary Medical Center, had been treating Athena, a young pitbull mix, who survived a horrific attack by another dog. “Three other vets had given up and told the owner there was nothing more that could be done,” she says. “My commitment to pet parents is to always find something to offer, especially focused on [the pet’s] quality of life.”

Through holistic treatments like hyperbaric oxygen, lasers and salt therapy, Siegel brought Athena’s infection under control, and the dog began making great progress. But during the attack, Athena was bitten around both her eyes, leaving her with a damaged eyelid and exposed to additional infection. Additionally, without an eyelid, Athena’s cornea was beginning to cloud and dry out, causing her to lose vision. No local veterinarians Siegel contacted had the expertise to repair the eyelid, so she made the call to Kwitko, a world-renowned eyelid surgeon.

“[Athena] had a lot of necrotic tissue, and the eye was suffering because there was no eyelid to keep it moist,” Kwitko recalls. “I said, well, we’re going to need a wound specialist. … And David [Halpern] immediately said, I’m in, let’s do what we can to help this little puppy.”

Halpern is a plastic and reconstructive surgeon with extensive experience in wound and soft tissue repair, so together, the two surgeons knew they had the knowledge to repair Athena’s eye.

“The doctors were compassionate and selflessly offered their expertise to assist with reconstructing Athena’s right eyelid so she could blink normally and save her eye,” Siegel says. “They were phenomenal, coming in on their own time. They were super responsive and used all their clinical experience for the benefit of this puppy.”

Kwitko and Halpern debrided and cleaned Athena’s injuries and “really got her wound looking great,” Halpern says. They also carefully moved the eyelids back into place and sutured them shut, allowing the tissue, and the corneas underneath, to begin healing.

Though both surgeons treat humans in their daily practice, they brought some canine experience to the table. As a wound specialist, Halpern had worked on a few dog cases before. Kwitko’s dog, Pippa, had experienced a minor eyelid issue of her own, so he was already familiar with the species’ eyelid anatomy. “It really wasn’t that much different [than working with humans],” Kwitko says. “Tissue is tissue, and you have to get rid of the bad tissue so that the good tissue can heal, which is what we did. We had to put the eyelids back into their position so that they could do their job.”

After her initial surgery and with continued care from Siegel, Athena began to rebound quickly. Kwitko and Halpern returned to Siegel’s office each weekend to check in on Athena as she recovered.

“The dog did remarkably well,” Kwitko says. “Her eyelid started to heal, and we could actually see the dog starting to see again. The cornea… started to clear up, and I could see the inside of the eye.”

“[Athena’s] personality really grabbed hold of you,” Halpern says. “As soon as you met the dog, she was very friendly and playful, never angry. She certainly had every reason to be, but this dog’s whole attitude was so fun.”

The team had one final eyelid reconstruction surgery scheduled —?but sadly, they were never able to complete it. Athena suffered from an autoimmune disorder that relapsed the day they planned to finish repairing her eyelid, and after weeks of intensive therapy, she ultimately succumbed to her illness.

Despite the discouraging results, Siegel was heartened by the compassion and drive to make a difference she saw in her fellow doctors.

“Even though the outcome was not the one I hoped for, the experience inspired me to collaborate with other experts and form stronger communities to ultimately do more good in the world,” Siegel says. “For me it’s a story of hope, the courage to try and the blessings that result.”

For both Kwitko and Halpern, helping Athena was about performing their duty to heal suffering wherever they can. It was also their way of giving back to the animals who so selflessly give to their humans.

“These creatures were put on earth [to be] innocent and loving,” Kwitko says. “They will do anything for us.”

“Animals do that to us. … They find a hole in our heart, and they patch it,” Halpern adds. “They’re a reflection of us sometimes. I think that’s that’s very powerful thing for people to understand. That’s why people have pets —?so they get that selfless love. It’s just a very giving relationship. And very valuable.”

The post To The Dogs appeared first on Tampa Magazine.