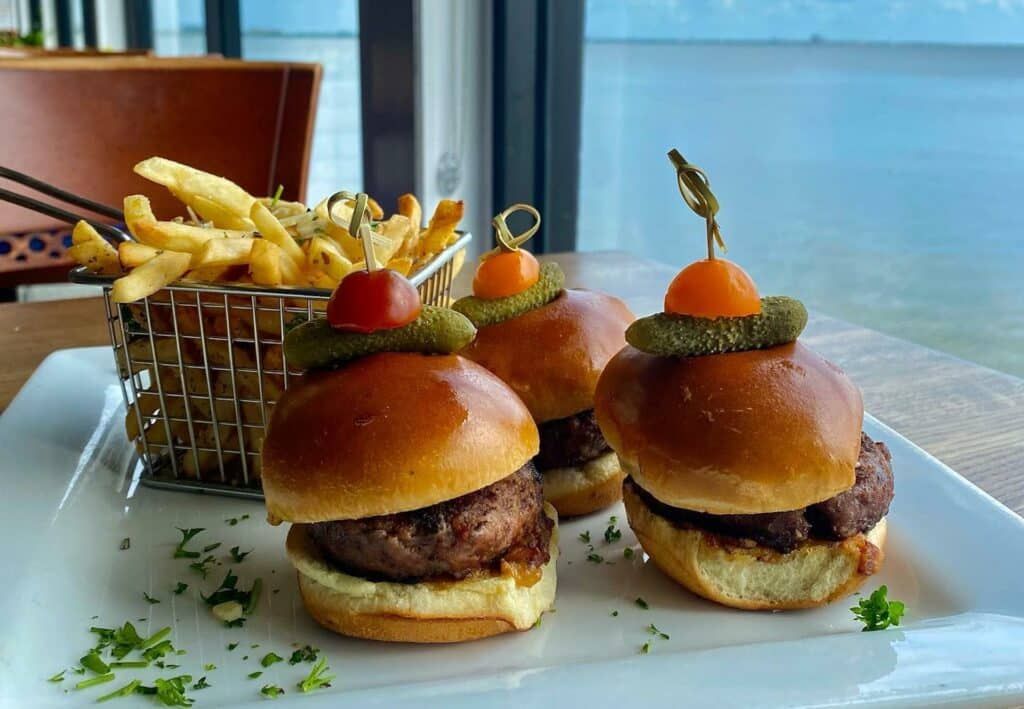 The Rusty Pelican is an iconic waterfront dining and event space on Rocky Point in Tampa. Since the pandemic, the restaurant team has worked tirelessly to revamp and renovate the space, and its summer menu.

The Rusty Pelican is a Tampa gem, a staple for locals and savvy visitors alike. During the COVID crisis, when fine dining was in short supply due to closures, The Rusty Pelican became even more of a destination as its gorgeous outdoor areas allowed for a socially-distant, sublime escape. wrote the team in release.

During that time Specialty Restaurants Corporation (SRC), which owns and operates the restaurant along with countless others, took the opportunity, while its indoor spaces were closed, to revamp the restaurant and its special event spaces and map out a summer relaunch when the time was right.

The Rusty Pelican has long been recognized as one of the most beautiful venues in the entire Tampa Bay region. Recently, and in preparation for summer, SRC has refreshed the space with soft refurbishments throughout. This includes new carpeting in the main dining room – featuring a blue and white aesthetic that mimics the ocean as well as new flooring throughout the property.

New lighting sets the mood throughout, including in the private event spaces, which will no doubt be bustling this holiday season. The concept is already taking bookings for Thanksgiving and Christmas.

Rusty Pelican features a total of six special event spaces, all displaying bay views. In fact, the combination of the breathtaking views and the polished, professional and dedicated service has garnered Rusty Pelican many accolades, including a “Couples’ Choice” Award from Wedding Wire.

Yes, enjoy the aesthetics, but don’t forget to treat yourself. The new summer menu, now in place, will delight the palate, further cementing the Pelican’s rep as one of the area’s premier restaurants. In fact, some of the new dishes are fan favorites from or inspired by Tampa location’s sister restaurant, Rusty Pelican Miami.

“Our menu is always changing with the seasons and we love introducing new temptations,” says Executive Chef Josue Torres. “But no matter what we introduce we always make sure it’s in line with what our friends and fans come to expect from The Rusty Pelican – delicious, fresh and thoughtful food served with style. Longtime fans fear not; signature favorites – such as the Key West Conch Fritters, Blackened Scallops, Shrimp Risotto and Crab-Stuffed Gulf Grouper, among others, remain. But new offerings abound, among them:

Seafood Tower – a decadent arrangement of oysters, shrimp, lobster and Alaskan snow crab with all the fixings

8 oz. Bistro Steak – one of the most tender cuts, lean yet juicy, served with 50/50 mashed potatoes and grilled broccolini

Enjoy one of the best brunches in all of Tampa

Rusty Pelican’s famous a la Carte Brunch now has a number of new dishes sure to make Saturday and Sundays reservation even harder to come by. Must-tries include the new brunch Board for Two, featuring Lobster Benedict, New York Strip Reserve, Chicken & Waffles and Fingerling Smash. The Seafood Tower can also now be found at brunch now as well as an array of new Mimosas by the Bottle with flavors ranging from tangerine ginger to pineapple peach.

This revamped menu also boasts a robust cocktail menu, and three must sips are:

Make plans for dinner with a view

What to read next:

The post Waterfront Tampa gem, Rusty Pelican, opens for brunch with a Bay view appeared first on That's So Tampa.