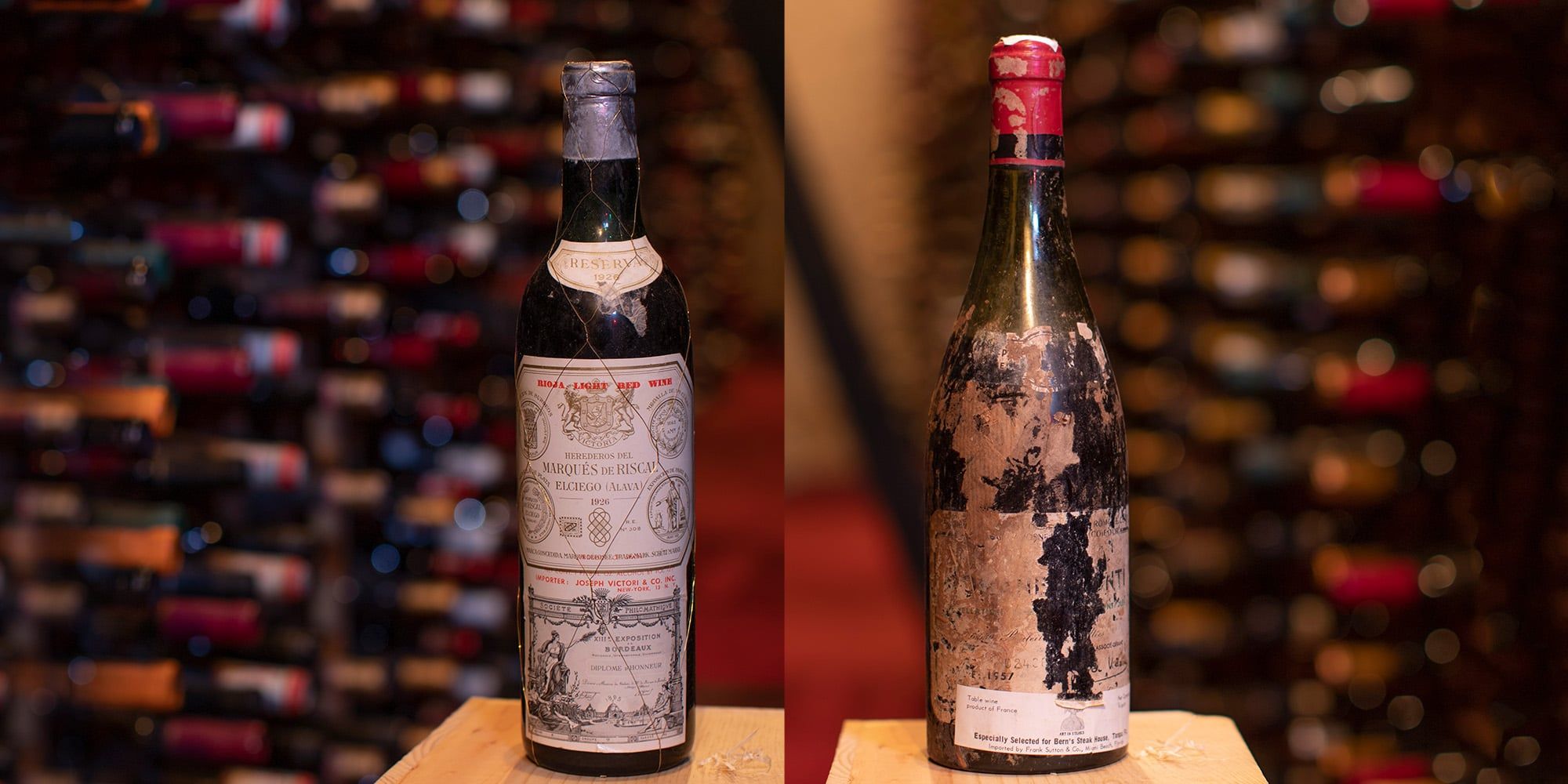 With the largest collection of any restaurant in the world, Bern’s Steak House is full of rare, even one-of-a-kind wines. It’s a small miracle, then, that wine director Eric Renaud could choose just five to highlight from the cellar’s 6,000 selections and more than half a million bottles (“I could have picked 100,” he tells us). But on the following pages, Bern’s top wine expert details some of the restaurant’s oldest and most unique vinos, most of which were still available to order as of the time this issue went to print. Sip on some history below.

This Burgundy has become the most expensive wine in the world, with a new release bottle going for between $12,000 to $15,000, Renaud says. “If you can find it,” he adds. The vineyard produces just 5,000 to 8,000 bottles per vintage, compared with the 40,000 cases produced each year at some of Burgundy’s largest vineyards. This rarity means RCRC is also one of the world’s most forged wines. The practice of forging picked up throughout the 1980s and ’90s, but since Bern Laxer purchased the bottle back in the early 1970s, Renaud is confident they have the real deal. “There are secret codes on the labels nowadays, all kinds of things to prevent fakes,” he explains. Bottles have even gone high-tech to keep wine secure. “There are bottles now that have a puffy sticker with a QR code you can scan to take the temperature [of the wine]. It’ll alert you if the wine has been out in the heat for too long,” Renaud says. “They’re also putting chips in corks to monitor the wine. It [sounds] crazy, but when you think about the cost involved with some of these wines, you want to have it protected.”

The Bern’s team just found a case of this wine last year, and it’s the only selection they have from this era. It’s a rare blend of Spanish tempranillo and cabernet, which would not have happened had the wine been produced just a decade later. When Francisco Franco rose to power, he destroyed wide swaths of vineyards throughout the country, primarily white wine-producing areas and those growing grapes not native to Spain. The French grapes in this vintage have helped it age more like a Bordeaux, Renaud says. “This wine has aged tremendously,” he adds, and the people who have tried other bottles from the case have loved it. In general, it’s getting harder to find wines with this much history wrapped into them. “With the popularity of wine over the last three decades, collectors have scoured the planet getting all these rare and odd wines,” Renaud says. “There’s very, very few of these types of things left available to people.”

2012 PENFOLDS GRANGE
PRICE: NOT FOR SALE

Grange is the favored varietal of Bern’s owner David Laxer, and this bottle is from his personal collection. The Penfolds winery partnered with Saint-Louis, a prestigious crystal maker, to create the accompanying Avum. Only five of the massive crystal decanters were created, one for each of the mostly inhabited continents, and Bern’s is the home of North America’s Avum. It’s a special bottle, Renaud says, and the restaurant could not sell this 6-liter bottle (equivalent to eight regular bottles) even if they wanted to; Florida law caps the sale of wine at 3 liters. “You wouldn’t want to drink it for, minimum, about 30 years,” he adds. “So it’s got a long life ahead of it.”

This Bordeaux was purchased from the château alongside bottles from 1855 and 1863, and Renaud estimates there are fewer than 10 of its kind left in the world. Beginning in 1855, Bordeaux began classifying its wines under Napoleon III to better express the quality and prestige of each one; now, anyone can pick up a Bordeaux and have an understanding of how it might compare to another. This 1845 vintage predates both that classification system and the phylloxera vine lice infestation that decimated Europe’s root stock in the 1870s and 1880s. Today, most of Europe’s wine-producing vines originated in America, where the roots had developed a resistance to phylloxera. When you combine all these factors, Renaud says, you have a wine that simply could not be re-created today. Plus, “how often can you consume something that’s 176 years old?” Renaud says.

The comparative bargain of the bunch, this California wine is called a “special Burgundy,” but as Renaud notes, it has nothing to do with Burgundy at all. For decades, American winemakers used “generic” terms like Burgundy and Champagne to describe the varietals they made that were similar to those that hailed from France, but in 2006 the two countries signed an agreement that put a stop to the practice. “Now you can’t call any wine Burgundy unless it’s from Burgundy,” Renaud explains, making this special Burgundy another impossible-to-replicate selection. The vineyard only made this blend of Napa Cabernet, pinot noir, petite syrah and mondeuse in what it deemed exceptional vintages, making it a bit of a “unicorn” of American wines. “This is one of those wines that I don’t think people really even knew existed back then because it was only made a couple of times and there was so little of it produced,” Renaud says. “To me, it’s a fun thing.” It’s also a reminder of this country’s wine-making peak, he adds. “It’s when Napa and California — America, really — was really trying to make great wines.”